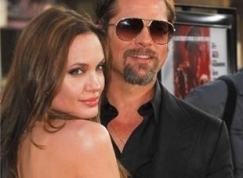 
Brad Pitt and Angelina Jolie donated total of $6.8 million to various charities last year, according to the Hollywood Reporter.

The report says their Jolie-Pitt foundation earned just over $13 million - half of which they gave to charity. The recipients were: Global Health ($2 million), Human Rights Watch ($1 million), Brad's Make it Right Foundation ($1 million), which has been building eco-friendly homes for Hurricane Katrina victims in New Orleans.

They also gave $500,000 to the Armed Services YMCA of the U.S. Army; $50,000 to the Springfield, Missouri Public Schools where Brad is from, and about a million dollars to projects in Cambodia, which is where son Maddox is from.