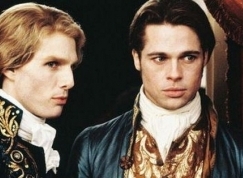 Tom Cruise and Brad Pitt in the movie "Interview with the Vampire" (1994).


Brad Pitt is sinking his teeth into the current vampire craze - he's teamed up with the makers of Twilight to revisit the undead in a new bloodsucker movie.

The Hollywood actor, who famously starred in 1994's Interview with the Vampire, is set to produce a new picture called Vlad, which tells the story of the young Count Dracula. The movie will reportedly focus on Dracula as a young prince and incorporate the true tale of Vlad the Impaler, the Romanian ruler said to have inspired Bram Stoker's legendary vampire.

Pitt's Plan B production company has joined forces with Summit Entertainment, the studio behind the massively popular Twilight franchise, for the venture.

It is not yet know whether Pitt will take the starring role in the film.