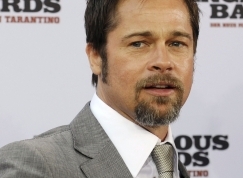 
Brad Pitt is OK after the motorcycle he was driving collided with a paparazzo's car Saturday in Los Angeles, a source tells Usmagazine.com.

Photo agency X17 reports that Pitt (45) was driving a days-old motorcycle when he was hit by a paparazzo from behind and lost his balance. There has been no reported damage to Pitt's bike, but the actor is said to have left it at the scene after exchanging words with the photographer.

The dad of six was wearing a helmet, something he says not only saves him from injury, but allows him to cruise around unnoticed.

"This is my anonymity," Pitt told W magazine of his motorcycle helmet. "With it, I'm just another a--hole on the streets."