Brad Pitt and Johnny Depp to Appear at Cannes 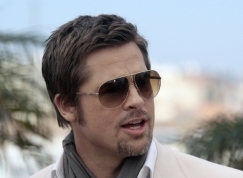 
Cannes Film Festival is always an A-list affair. But when you have Brad Pitt and Johnny Depp on the guest list, it takes the event to the next level!

According to People, Brad and Johnny are expected to make an appearance at the festival in May, as well as Sean Penn and Russel Crowe. Pitt and Penn star in the film Tree of Life by director Terence Malick, which will be screened at Cannes this year. The movie centers around a family with three boys in the 1950s. The eldest son witnesses the loss of innocence.

Since the festival is opening with Robin Hood, Crowe will likely be on hand, alongside co-star Cate Blanchett. Several other films are expected to be shown, including Rum Diary starring Johnny Depp, Biutiful with Javier Bardem, as well as Mickey Rourke, Bruce Willis, Jason Stratham, Jet Li and Gov. Arnold Schwarzenegger in the testosterone-charged Expendables.