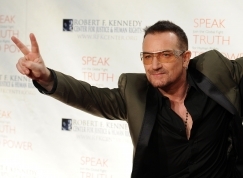 
Bono's bank account is as big as his heart and that's saying a lot! But the U2 rocker is starting to think he's seriously overpaid for what he does.

Bono, who has an estimated net worth of almost $700 million, says he donates as much money as he can to charity because he thinks he makes more than he deserves.

Speaking at the launch of Nike's 'Lace Up, Save Lives' campaign, which aims to raise awareness and funds for the (Red) charity, Bono said: "I am very well paid, overpaid and even over-rewarded for what I do."

Bono has donated millions of dollars to various charity campaigns throughout the year. Throughout his career he's received 3 nominations for the Nobel Peace Prize, and was even knighted in 2007!