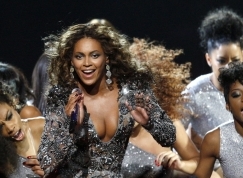 The choreography in the black-and-white video sparked a dance craze and has been parodied by the likes of Justin Timberlake and the Jonas Brothers.

The second most popular video - voted for by fans of the music website Muzu.tv – was Fatboy Slim’s Weapon Of Choice, which featured Christopher Walken dancing in an empty hotel.

Madonna’s dancing in a pink leotard in Hung Up, came third, followed by Kylie Minogue’s Can’t Get You Out Of My Head, where she dances provocatively in a white hooded outfit.

Eminem’s Stan, which tells the story of an obsessive music fan, was voted fifth.

Do You think the right video won?