Beyonce's bags get own hotel room 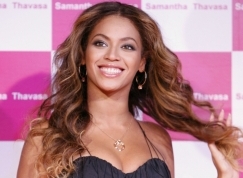 
Beyonce proved her superstar status in Britain earlier this week - she hired an extra hotel suite to store her designer stage outfits.

The Crazy In Love hitmaker is currently touring the U.K. and performed in Liverpool, north-west England on Wednesday night. The singer stayed at the Lowry Hotel in nearby Manchester - but paid out for an additional room in Liverpool for her clothes.

A source tells the Daily Mirror newspaper, "She had seven suitcases, three hand-luggage bags and two boxes, all for her mammoth gig.

"Beyonce doesn't do things by halves - especially where her performances are concerned. So in the cases there were apparently 14 dresses along with numerous pairs of shoes. Another box was full of make-up and the other had about 25 wigs in it."

Beauty Evening for Ladies in Marbella