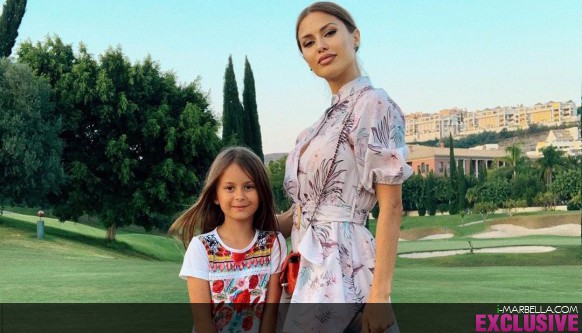 Victoria Bonya suffers from the vagaries of her daughter - MARBELLA 2019 Source: Instagram

Victoria Bonya brings up her seven-year-old Angelina. Recall that Victoria gave birth to a daughter from millionaire Alex Smerfit, the son of Irish billionaire Michael Smurfit. whom she broke up with several years ago. The couple did not last long though but after parting, they were able to maintain friendly relations.

There are very few places in the world that inspire such serenity and beauty as the surroundings of Anantara Villa Padierna Palace Hotel. Angelina spends a lot of time with her father, but now she is resting with her mother in Spanish Marbella. Recently, Boni's daughter began to show character. Bonya showed her fans that Angelina didn’t obey her at all in a video posted on Instagram.

“You don't need anything. If you could, you would be lazy for a week. Gave you a lazy day, Angelina, and now it's time to work. Come on, we have a photoshoot now. Let's go-to! We should at least clean the number, ”Victoria scolds her daughter.

However, Angelina is in no hurry to fulfil the requests of her mother. As it turned out later, the girl did not want her mother to leave for Moscow. “This is how we live,” Bonya says to his fans. However, at this age, many children begin to show character and cease to obey their parents.

Victoria became known after appearing on the TNT reality show Dom-2 in 2006. She became the host of the program Cosmopolitan and she has also appeared on the cover of Maxim magazine and the Russian magazine Penthouse as well as in several music videos.

She moved to Moscow at the age of 16. She represented Russia at the beauty pageant Miss Earth in 2001. She landed on the list of 50 Most Beautiful People in Moscow for TimeOut magazine.

Nestled between three golf courses, this Tuscan palazzo-style resort assumes a picturesque position in Andalusia’s ‘Golden Triangle’ between Marbella, Benahavís and Estepona in the south of Spain.

Retreat to an elegant sanctuary, surrounded by more than 1,200 original works of Italian and Andalusian art. Enjoy views over manicured Tuscan lawns and lush rolling greens from your spacious room, suite or villa. Make the most of cutting-edge leisure and wellness facilities right at your door with the 22,000 sqm Racquet Club or the lavish Villa Padierna Palace Spa by Anantara.