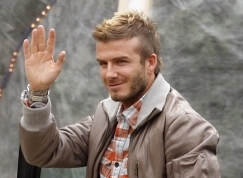 
Soccer star David Beckham is reportedly set to follow in his wife Victoria's fashionable footsteps by launching his own clothing range.

Former Spice Girls star Victoria turned her back on singing to concentrate on her design label, which includes her Victoria Beckham couture dress collection, as well as jeans and sunglasses which were previously launched under her Dvb brand. Now her husband is set to follow suit with his own menswear range, according to Britain's The People newspaper.

A source tells the publication, "David has been consulting the same people who have worked with Victoria on her extremely successful fashion ranges, and there are big plans. David is really into fashion, it is a real passion of his so it made sense that he designed his own. It is going to be a real money-spinner. He and his team are hoping that it will go global".