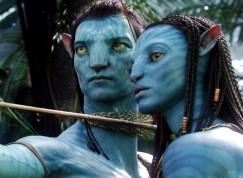 Avatar is almost close to reaching the world record at the box office, which is currently at $601 million. The current record is held by James Cameron for 'Titanic'.

Avatar has only been available in cinemas for six weeks but ticket sales are likely to have been buoyed by its success at the Golden Globes last week. It won the best movie prize at the awards while James Cameron was named best director. Avatar also picked up eight BAFTA nominations, including best film and best director. All eyes are now on the Academy Award nominations with Avatar tipped to be a front runner.

Have You seen Avatar? What do You think of the hit film?

Avatar in 2D to be banned in China