Ashton: Arguing with Demi made me realise I loved her 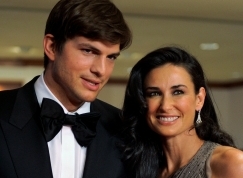 
Ashton Kutcher says he realised he was in love with Demi Moore in the middle of a huge argument.

Ashton, who married the actress four years ago, believes the key to a lasting relationship is being able to put up with another person’s bad habits and still loving them for their flaws. He said: "I think one thing sort of defines it which is, it's not how much you love someone when you love them, but it's how much you love them when you hate them."

Kutcher (31) also claimed good manners are the key to being a good partner, and says he learned how to treat women properly from a young age. He told Parade.com: "My brother had a heart transplant when he was 13, and my parents were at the hospital a lot so I went and I stayed at a friend's house.

"And his mother was this really wonderful, wonderful woman that sort of taught me a bunch of things like table manners and how to treat a woman - pulling out her chair, opening the door for her.
So while my brother was in the hospital, I basically learned etiquette and how to use it when you're dating a woman."

Demi and Ashton Want a Baby