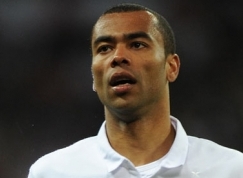 
Ashley Cole has finally broken his silence over his split from wife Cheryl Cole admitting his 'life has been ruined' and ‘everything’s gone so wrong.’

The cheating sex-texter is reportedly crippled in devastation as he confessed: ‘F****** hell, my life is ruined.’

Yesterday the Chelsea defender was pictured without his wedding ring on. Cheryl was spotted not wearing her ring when the news of Ashley’s infidelity broke but the shamed sportsman optimistically kept it on throughout the ordeal. It is thought this may be him showing defeat.

Stranded in the South of France, sulking Ashley (29)  has been bombarding Cheryl with messages and begging for a make-or-break meeting. It is thought the X Factor judge ahs contacted Ashley telling him she wants the house – a clear sign there is no going back.

A source from the clinic told The Sun newspaper he is in a ‘dark place’ which is no wonder as he has not only lost his gorgeous wife but his football career is hanging in the balance as well.