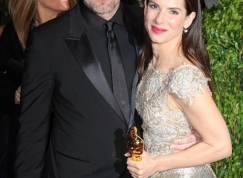 
Jesse James may really be the new Tiger! Every day we get new information regarding his alleged scandalous affairs, and today there's a new mistress!

The new mistress claims Jesse and her had a full blown relationship with he was married to Sandra Bullock. He even paid her rent!

"She had a full-on relationship with Jesse," a good friend shares information about the mistress who wishes to remain unidentified. "After a while Jesse became obsessed with her and she couldn't handle it anymore."

Not only was he having an affair with her, he was paying her bills too! "Jesse got a house for this woman and she said he paid the rent on it every month," the source told RadarOnline.com. "She said he only stopped paying for it once she broke up with him."

But things went sour when Jesse reportedly became obsessive about the relationship. The source added, "If he couldn't get a hold of her for some reason he'd go over to her house looking for her," the source said. After a while, "she got kind of scared of him and broke it off."

If there's any hope of Sandra and Jesse reconciling, she needs to stay off the internet. These mistresses are ready to talk to anyone, and we bet most of their stories are either fabricated or exaggerated.