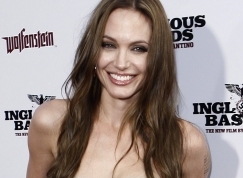 
According to a new biography, the sexy actress Anglina Jolie bedded her mum's boyfriend when she was just 16 years old.

Angelina was devastated when her mother died of cancer, in 2007, at the age of 56. Now, controversial writer Andrew Morton alleges that the star slept with her mom Marcheline Bertrand's live-in lover.

"Marcheline had a live-in boyfriend whom she was very much in love with, but Ange slept with him when she was 16 and barely out of school," said a source.

"Her mother found out and ended her relationship with the man. Reports in Now magazine claim that the two women struggled to rebuild their relationship after Angelina confessed to the night of passion.