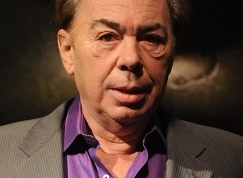 
Composer Andrew Lloyd Webber has been diagnosed with prostate cancer, his spokeswoman said Sunday. The 61-year-old Lloyd Webber's condition is in its early stages.

"Andrew is now undergoing treatment and expects to be fully back at work before the end of the year," the statement said.

Lloyd Webber recently announced plans for a sequel to his phenomenally successful musical "Phantom of the Opera". Called "Love Never Dies", it is scheduled to open in London in March and follow on Broadway in November. Rehearsals begin in the new year.

According to his Web site, Lloyd Webber has won seven Tony Awards, three Grammy Awards, a Golden Globe and an Oscar. In 2006, he was awarded the Kennedy Center Honor. Lloyd Webber was knighted in 1992 and named to Britain's House of Lords in 1997.