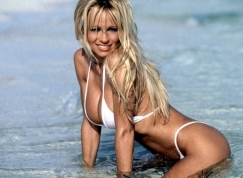 Pamela Anderson showed off her skills for stripping and dancing at a recent private party by baring all as she performed a stunning and sexy routine for close friends.

The actressmodel, who has finetuned her dancefloor skills on the current season of U.S. TV show Dancing with the Stars, wowed castmates and pals at photographer David LaChappelle's studio with her revealing moves.

Sources tell that the former Baywatch babe arrived in little more than lingerie and then stripped off to show off her dance moves as guests, like Fergie, watched in amazement.

One partygoer tells the website, "By the end of the night, Pam was dancing around in nothing but her birthday suit (naked). Everyone was shocked, but everyone was having fun".

Dancing with the Stars producers have reportedly told Anderson she needs to make sure she's covered up at all times on the show - because they fear a wardrobe malfunction on live TV could cost them in fines.