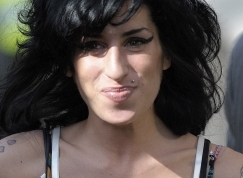 
Clearly, Amy Winehouse has an addictive personality. She may have kicked her drug habit in the past few months, but she's picked up a new hobby - plastic surgery.

Amy went under the knife last month and got a new pair of boobs, and now she's reportedly addicted and wants to get more work done. Next on her agenda? A new nose.

A source told Britain’s The Sun newspaper: “Everyone tells her there’s nothing wrong with her nose. But Amy does nothing by halves. Now she’s beaten drugs, plastic surgery must not become her next obsession.

Amy is reportedly become obsessed with looking like a pin-up lately and is determined to get as much work done as she can to make the transformation.