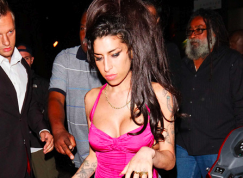 Amy Winehouse wants to settle down with a "builder or painter and decorator" and have children.

The 'Back To Black' singer has been unlucky in love - recently splitting with film director Reg Traviss, 33, amid reports he was still romancing his former lover and having a complicated relationship with ex-husband and former drug addict Blake Fielder Civil - and friends say she is now getting broody and wants to meet someone normal".

A source told the Daily Star newspaper: "She never thought that she'd be single at 27, and now she just really wants to find a normal guy to settle down with and have a baby. She'd be more than happy to go out with someone away from the limelight - she is just fed up of being alone. She'd date a builder or painter and decorator, someone who's kind and funny."

Although she is a notorious party animal, Amy reportedly even spent her 27th birthday on Tuesday (14.09.10) alone at home, with friends saying she is still getting over her split with 'Psychosis' director Reg.

The source added: "Amy really misses Reg, but when he went back to his ex-girlfriend Raven, she realised he was using her fame to get noticed." Her father, Mitch, also confirmed Amy - who is believed to be working on the follow up to her second album 'Back To Black' - is looking forward to motherhood. He said: "She's become so broody. She loves kids, she's been talking about having a baby and is now at the age where she wants to have one."