America Ferrera shows off her curvy figure in Bahamas 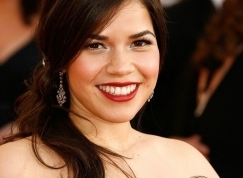 
One of the curvier actresses on primetime TV, Ugly Betty star America Ferrera gave fans a rare change to see her shapely figure as she relaxes in the Bahamas. While many of her Hollywood contemporaries are starving and wearing size zero clothes, the 25-year-old has always championed a healthier attitude to body image.

Wearing a burgundy and aquamarine bikini top and matching shorts, the curvy star strolled through the Caribbean surf as she holidays at the exclusive Atlantic resort.

America is currently enjoying a few days relaxation with friends after she recently completed filming the fourth season of Ugly Betty. Only two weeks ago, America and her co-star Becki Newton were spotted filming the new series on the paradise island.

While her role as Ugly Betty requires America to be curvy, the actress said she is perfectly happy with her figure and refuses to loose weight to conform to the Hollywood ideal.

'I think it's hilarious when people call Jessica Alba or Eva Longoria curvy. Come on - they're not curvy. I'm curvy!