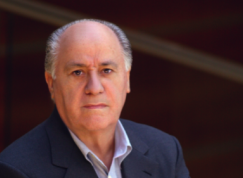 
Hands up anyone – man, woman or child – who does not own one item of clothing produced by Spanish retail giant Inditex.

The Duchess of Cambridge, Catherine Middleton, would definitely not be among them, as she was photographed wearing a dress by Zara – Inditex’s principal label – the day after her marriage to Prince William last April. Inditex means more than Zara, however, and includes Massimo Dutti, with its Oxford Street and Regent Street stores, together with the Bershka and Pull & Bear, Oysho and Stradivarius labels. With interests no longer restricted to clothing, but including shoes and accessories as well as household goods, Inditex is the creation of one man, 75-year-old Amancio Ortega Gaona.

Ortega went into business for himself when he was 27, designing and producing lingerie and housecoats which he sold through a shop where he formerly worked. On opening the first Zara boutique in La Coruña in 1975, Ortega laid the foundations of an enterprise with 5,000 outlets and 92,000 employees in 78 countries.

Last week Ortega, who holds 60 per cent of Inditex shares and is the world’s seventh-richest man, passed the reins to the company’s current vice-president, 47-year-old Pablo Isla. He remains on the board but will no longer be involved in the day-to-day running of the company, Spain’s third-most important after Telefonica and Santander.

Son of a railwayman, Ortega was born on March 28, 1936, in Busdongo de Arbas in Leon and his family moved to La Coruña in 1944. Consistent with his family’s modest background he was expected to become a wage-earner on finishing his elementary education.  He started work aged 14 at an outfitter’s called Gala, later moving to another establishment, La Maja. Unlike Hennes & Moritz, whose turnover Inditex oustripped last June, the Spanish firm does not systemically outsource  manufacturing to Asia. Clothing is produced in Spain, Portugal and Morocco while shoes are produced principally in Elche (Alicante), the traditional home of Spain’s footwear industry.

There is now speculation that  26-year-old Marta – Ortega’s daughter with his second wife, Flora Perez – who started at the bottom in the family business is being groomed to eventually run the family business. Twice-married Ortega lives in an inconspicuous apartment building in La Coruña, dresses informally and does not give interviews. “I want only my family, friends and colleagues to recognise me in the street,” Ortega told veteran journalist Covadonga O’Shea.  Former editor of the women’s magazine, Telva, and sister-in-law of Santander banker Emilio Botin, O’Shea has written the closest thing to his official biography.

It is doubtful if anyone passing seldom-photographed Amancio Ortega Gaona in the street would look at him twice. The richest man in Spain has been as successful in courting anonymity as in creating a business empire.

pastor stephen begi 25-02-2013 12:02 Dear Brother,
God bless you and give you good health and long life to assist young disadvantaged kids.
i am a pastor from Africa preaching and caring young disadvantaged kids to get food,education,shelter,medication and cloths,please,for now i am request you to join me as a brother to boost this kids to grow well.i hope you will be positive to me.
your pastor and caretaker stephen.
0

Zara steps out to lead way for Spanish giant