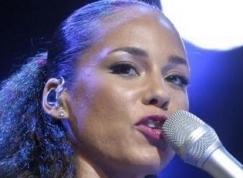 
For the first time, one of the world´s most current and well loved soul artists, Alicia Keys, performed in the Teatro Real in Madrid on Monday night.

The fantastic concert sell out concert lasted for fifty minutes and Alicia gave it her all to the crowded auditorium.  Amongst the 1.700 fortunate to attend the concert were many celebrities from the world of sport and culture.

Outside, however, there were hundreds of people who were unable to see the singer and police even had to quieten protests.  Some had queued for hours just to secure a place in the concert.

Alicia, performed songs from her new album, “The element of freedom”.