Alanis Morissette Gets High from Running 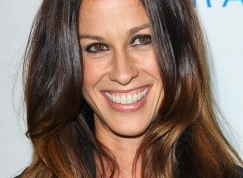 
Alanis Morissette struggled with depression her whole life, but recently, she found an effective antidote: running.

Morissette, 35, tells Runner's World that "running has made being depressed impossible. "If I'm going through something emotional and just go outside for a run, you can rest assured I'll come back with clarity."

The Grammy-winning singer, who has run two marathons, tries to live a healthy lifestyle, including eating lots of kale. But she still occasionally indulges "in red wine, and it's fun to have medical marijuana once in a while," she says.

Always an active athlete – Morissette says she was once a "hard core" swimmer who trained seven days a week – she sometimes struggles with the motivation to run. "But I tie my laces, put on a tight bra and get out there like a little robot. The first 10 minutes are excruciating, but soon I get into the flow."