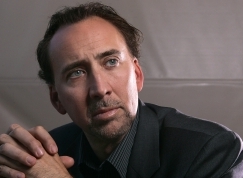 
While Nicholas Cage is claiming that bad money management is behind his financial collapse, the former accountant who worked with the star claims that it's Cage who is to blame for his own ruin.

Samuel J. Levin, Cage's former financial advisor, paints a portrait of the 45-year-old star as an out-of-control and debt ridden spender who bucked any attempt to reign in his over-the-top lifestyle. Cage claims in his filing that "Samuel J. Levin, "lined his [own] pockets with several million dollars in business management fees while sending Cage down a path toward financial ruin." Levin denies the claims, saying he was paid a standard fee for a business manager.

By the time he had hired Levin in 2001, Cage "had already squandered tens of millions of dollars he had earned as a movie star" and owed millions in unpaid income taxes. Levin advised him that he needed to earn $30 million a year to keep up his lavish lifestyle.Levin tried to stop the financial bleeding, persuading Cage to sell off a dozen of his automobiles and his $1.6 million comic book collection. Following a string of box office hits, Cage went on an "epic spending spree." According to Levin, in 2007 the National Treasure star purchased three homes at more than $33 million; 22 cars, including nine Rolls Royces; 12 purchases of expensive jewelry and 47 pieces of artwork. By 2008, Cage owned 15 palatial homes around the world, four yachts, an Island in the Bahamas, and a Gulfstream jet.

While in his lawsuit Cage alleges that he was in the dark about his dire financial situation, Levin claims he did everything short of cutting up the actor's credit cards, including warning Cage's agents and representatives and pleading with him not to buy more real estate.

35 towns in Malaga spend more than they make

Real estate expert Kristina Szekely:Now is the time to buy