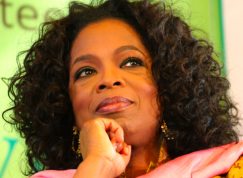 The tot’s parents Beyonce Knowles and Jay-Z have reportedly been carefully considering who to entrust with taking charge of the spiritual guidance of their 19-day-old daughter and chose the media mogul along with the rapper’s best friend Tyran ‘Ty Ty’ Smith.

Sources close to the couple told website Media Take Out they wanted to make sure Blue Ivy’s Godparents were not blood related. Although Beyonce’s sister Solange wasn’t chosen, she recently revealed she is ready to spoil Blue Ivy in order to get back at Beyonce for letting her seven-year-old son Julez do whatever he wants.

“This may sound awful, but I’m excited to let the baby do whatever it wants in the same way my sister’s done with my son,” she said.

“I’m going to get her back for all those late-night popcorn sessions and just spoiling my child to no end!