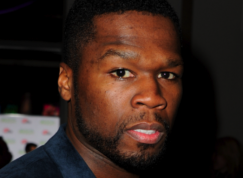 
The rapper 50 Cent has revealed he was legally adopted.

The 35-year-old rapper — whose real name is Curtis Jackson — grew up not knowing his father and was raised by his grandmother from the age of 12 after his mother was murdered aged just 27.

Speaking on forthcoming VH-1 documentary 50 Cent: The Origin Of Me, 50 told a group of students in South Carolina, “It feels good for me to learn more about my actual history. A lot of people don’t know but I’m adopted.

“Yeah, my grandmother adopted me after my mother passed away. So she’s like my legal guardian. My grandparents were from out here so the last time I was out here I was like six years old.”

The documentary uncovered evidence that some of 50′s distant relatives had been slaves for prominent citizens, but the rapper doesn’t believe their oppression had any impact in his early misdemeanours, including dealing drugs in New York.

Writing for Vanity Fair magazine, documentary maker David Kamp revealed the rapper told him, “I don’t necessarily see a connection between stuff that happened 200 years ago in Edgefield and stuff that happened to me on the south side of Jamaica, Queens. Some people just choose to be bad.”