10 Minutes with Eric Conley - The Voice of Barry White 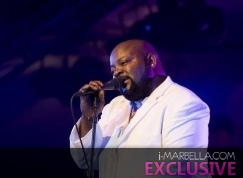 
Eric Conley was born in Arlington, Georgia on August 15, 1962. Being born into a nationally known gospel family, Eric was immersed in music from the start. Today he is the voice of Barry White and his show is something to be seen. Eric also performed in Marbella this summer at the Millionaires' Summer White Party. i-Marbella brings you the exclusive interview with the talented singer!

At 11 years old, he started singing in several successful touring gospel attractions, which gave him instant recognition in gospel and soul music. With a keen ear for pitch and harmony, Eric quickly absorbed the fundamentals of music; being able to listen to a musical arrangement and play it immediately on several different instruments. He was very active in the Atlanta, Georgia music scene and was talented enough to accompany soul artist Peabo Bryson as one of his background vocalists.

In high school, Eric enjoyed sports, but, inspired by his musical hero, the great Barry White, he worked harder on becoming a confident musician. At the University of Maryland, where he majored in business, he refused a sports scholarship in order to better concentrate on his studies. After college, Eric was stationed in Germany with the US Army, receiving an honorable discharge in 1987. Once out of the Army, Eric took on his new persona as Central Europe’s hottest soul singer. After performing hundreds of concerts singing the R&B Soul classics of the 70’s, 80’s and 90’s, Eric decided to hang his hat on what he does best . . . sing the music of the legendary Barry White. With Eric’s unique voice, he quickly discovered that there was no other vocalist in the world capable of so faithfully emulating Barry White’s “Voice of Love”.

With Europe’s infatuation for Soul and R&B, Eric Conley became an overwhelming success. After he formed the “Unlimited Love Orchestra”, Eric was called to entertain Europe’s most elite audiences. Today, the Barry White Experience starring Eric Conley tours the world and helps keep the music of Barry White alive in our hearts. When the soft speaking-soul master Eric Conley is not on stage, he pursues his hobbies. As an avid art lover, Conley visits art museums in the respective cities on his tour. He is also a gourmet chef creating international cuisine for family & friends. Eric is blessed with the tone and the stage presence to keep the Barry White legacy alive for many years to come.

1.      How did you discover that music was your passion?

As far back as I can remember it was when, I use to follow my father and his group around to those little old churches with the wood floors! That is what gave me my passion.

I choose my major in business because I find it necessary to have the knowledge and tools to be successful at my craft.The Music comes natural for me.

I find myself enjoying the culture and it’s also less complicated to connect with the rest of world from here!

5. Why was Barry White your idol? What is it about him that you admire?

Its just the connecting the identity of inner beauty to become happy and free! It’s because I can be me and represent at the same time! It’s the way he could compose; is what I mostly admired and also his ability to say what others were thinking.

6.      How did you come up with the idea of Barry White Experience?

I was looking for a simple way that fans could remember Barry and connect with my project! At the same time, to separate it from all others of its kind! This was not to be just another tribute show but rather an elite show “Remembering Mr. Barry E White”.

7. Does it bother you sometimes that you are considered an imitation of Barry, rather than a new artist? Do you also write your own music?

8. What do you consider to be your biggest accomplishment?

Surviving war has to be the biggest for me, I would say.

9. What are your ambitions now?

As of now I´m looking to complete my album and always looking to improve myself.

At the Millionaires' White Party

10. What are you working on at the moment?

At the moment I’m working on my Album “LOVE MAKING MUSIC” and tour dates for year 2012.

11. What are your other passions besides music?

I love Art and traveling, to induce other cultures.

12. You performed at the Millionaires' party in Marbella. What did you think about Costa del Sol?

Wow!!! It was a charming Experience! I enjoyed the atmosphere and being surrounded by the lovely people there! One I won’t forget for a long time. Would love returning there with a little more time to explore my next visit!