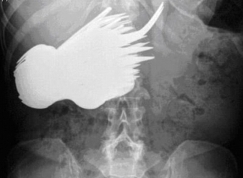 
52-year-old Dutch woman Margaret Daalman came to hospital complaining of stomach ache. Surgeons in Rotterdam in the Netherlands were astonished when X-rays showed 78 different items of cutlery in the 52-year-old woman’s stomach. She was rushed to surgery in a desperate attempt to remove the dozens of forks and spoons trapped inside her body one by one.

One of the medics commented that Daalman seems to have been suffering from some sort of obsession and every time she sat down for a meal she would ignore the food and eat the cutlery.
When Ms Daalman went in for her surgery, she told the doctors that she didn’t know why, but she felt the urge to eat the silverware. Medics also revealed that it was not the first time that she had been treated for eating cutlery.
She was diagnosed as suffering from a borderline personality disorder that left her an urge to eat forks an spoons. She never ate knives, however – and could not explain why not.
Ms Daalman made a full recovery and is said to be responding well to therapy she was receiving for the disorder.
The astonishing images were actually taken over 30 years ago – but they were published for the first time this week in a Dutch medical magazine.