What is the Burning Man? 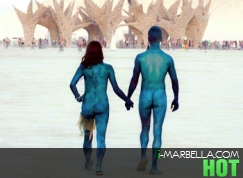 
Once a year, tens of thousands of participants gather in Nevada's Black Rock Desert to create Black Rock City, dedicated to community, art, self-expression, and self-reliance. They depart one week later, having left no trace whatsoever. Burning Man is also an ever-expanding year-round culture based on the Ten Principles. The Burning Man 2013 ended on the 3rd of September.

Burning Man is a week-long annual event held in the Black Rock Desert in northern Nevada, in the United States. The event begins on the last Monday in August, and ends on the first Monday in September, which coincides with the American Labor Day holiday. It takes its name from the ritual burning of a large wooden effigy on Saturday evening. The event is described as an experiment in community, art, radical self-expression, and radical self-reliance. Burning Man is organized by Black Rock City, LLC. In 2010, 51,515 people attended Burning Man. 2011 attendance was capped at 50,000 participants and the event sold out on July 24. In April 2011, Larry Harvey announced that the organization had begun the process of transitioning management of the festival over to a new non-profit organization called the "Burning Man Project".

There are no rules about how one must behave or express oneself at this event (save the rules that serve to protect the health, safety, and experience of the community at large); rather, it is up to each participant to decide how they will contribute and what they will give to this community. The event takes place on an ancient lakebed, known as the playa. By the time the event is completed and the volunteers leave, sometimes nearly a month after the event has ended, there will be no trace of the city that was, for a short time, the most populous town in the entire county. Art is an unavoidable part of this experience, and in fact, is such a part of the experience that Larry Harvey, founder of the Burning Man project, gives a theme to each year, to encourage a common bond to help tie each individual's contribution together in a meaningful way. Participants are encouraged to find a way to help make the theme come alive, whether it is through a large-scale art installation, a theme camp, gifts brought to be given to other individuals, costumes, or any other medium that one comes up with.

The Burning Man project has grown from a small group of people gathering spontaneously to a community of over 48,000 people. It is impossible to truly understand the event as it is now without understanding how it has evolved. See the first years page and Burning Man 1986 - 1996 for the legendary story of Burning Man's beginnings and to understand how the event has come to become what it is today. The timeline gives a short overview of what each year looked like. Please also check out the detailed archives for years, 1997 to last year. Within each of these years are descriptions each year's art theme, theme camps, large art installations, as well as maps, journals of our city being built, the newsletters to the community for each year, issues of the Black Rock Gazette (a daily news publication produced and printed on the playa), and clean up reports for each year, including a list of those sites that failed to "leave no trace". These pages help understand the larger scope of the entire experience, from the planning that happens year-round to make each event possible, to the clean-up efforts which take place for sometimes months after the city has disappeared.