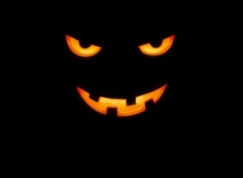 Halloween is a secular holiday combining vestiges of traditional harvest festival celebrations with customs more specific to the occasion such as costume wearing, trick-or-treating, pranksterism, and decorations based on imagery of death and the supernatural. The observance takes place on October 31.

Though it was regarded up until the last few decades of the 20th century as primarily a children's holiday, in more recent years common Halloween activities such as mask wearing, costume parties, themed decorations, and even trick-or-treating have grown quite popular with adults as well, making Halloween an all-ages celebration.

What does the name 'Halloween' mean?

The name Halloween (originally spelled Hallowe'en) is a contraction of All Hallows Even, meaning the day before All Hallows Day (better known as All Saints Day), a Catholic holiday commemorating Christian saints and martyrs observed since the early Middle Ages on November 1.

How and when did Halloween originate?

The best available evidence indicates that Halloween originated in the early Middle Ages as a Catholic vigil observed on the eve of All Saints Day, November 1. It has become commonplace to trace its roots even further back in time to a pagan festival of ancient Ireland known as Samhain (pronounced sow'-en or sow'-een), about which little is actually known. The prehistoric observance marked the end of summer and the onset of winter, and is said to have been celebrated with feasting, bonfires, sacrificial offerings, and paying homage to the dead.

Despite some thematic similarities, there's scant evidence of any real continuity of tradition linking the Medieval observance of Halloween to Samhain, however. Some modern historians, notably Ronald Hutton (The Stations of the Sun: A History of the Ritual Year in Britain, 1996) and Steve Roud (The English Year, 2008, and A Dictionary of English Folklore, 2005), flatly reject the commonly held notion that November 1 was designated All Saints Day by the Church to "Christianize" the pagan festival. Citing a lack of historical evidence, Steve Roud dismisses the Samhain theory of origin altogether.

"Certainly the festival of Samhain, meaning Summer's End, was by far the most important of the four quarter days in the medieval Irish calendar, and there was a sense that this was the time of year when the physical and supernatural worlds were closest and magical things could happen," Roud notes, "but however strong the evidence in Ireland, in Wales it was May 1 and New Year which took precedence, in Scotland there is hardly any mention of it until much later, and in Anglo-Saxon England even less."

The earliest documented customs attributable to Halloween proper grew out of the tandem observances of All Saints Day (November 1), a day of prayer for saints and martyrs of the Church, and All Souls Day (November 2), a day of prayer for the souls of all the dead. Among the practices associated with Halloween during the Medieval period were the lighting of bonfires, evidently to symbolize the plight of souls lost in purgatory, and souling, which consisted of going door-to-door offering prayers for the dead in exchange for "soul cakes" and other treats. Mumming (or "guising"), a custom originally associated with Christmas consisting of parading in costume, chanting rhymes, and play-acting, was a somewhat later addition to Halloween.

Again, however, despite the obvious similarities between old and new, it's an overstatement to say these Medieval customs "survived" to the present day, or even that they "evolved" into modern Halloween practices such as trick-or-treating. There's no direct historical evidence of such a continuity. By the time Irish immigrants brought the holiday to North America in the mid-1800s, mumming and souling were all but forgotten in their home country, where the known Halloween customs of the time consisted of praying, communal feasting, and playing divination games such as bobbing for apples.

The secular, commercialized holiday we know today would be barely recognizable to Halloween celebrants of even just a century ago.

Halloween: A Celebration of the Dark (1)