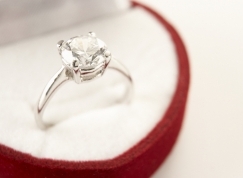 
Sanitation workers sorted through 10 tons of trash to recover a wedding ring accidentally thrown away by a New Jersey couple.

Bridget Pericolo had placed the ring in a cup that her husband, Angelo, threw out with the garbage before leaving for work Monday morning. When he realized the mistake, he contacted the town's sanitation supervisor, who suggested coming by the Parsippany dump.

Later in the day, supervisor Michael Brotons and sanitation workers Edgar Lopez and Joseph McGee dug through the refuse until they found the garbage bag that Angelo Pericolo had thrown away. "I think it was a miracle," Bridget Pericolo told The Daily Record newspaper.

According to Brotons, this was not the big recovery at the Parsippany dump. In the past, workers had retrieved a walker and false teeth.