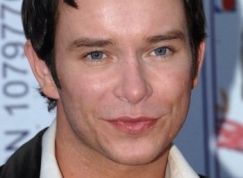 The star’s grief-stricken bandmates carried his coffin to the north Dublin church last night where an all-night vigil was held and a troop of fans from around the world filled the streets outside.
A massive security operation went underway as police secured the scene with the remaining band members singing during the official service.
St. Laurence’s Church – set amidst the run-down, crime-ridden area where Gately grew up – has a capacity of just 550 and is being reserved for family, friends and VIPs. Famous faces expected to attend include Gary Barlow, Louis Walsh, Westlife, David Furnish and former Taoiseach Bertie Ahern.
Loudspeakers will broadcast the ceremony to the crowds outside while full coverage is set to be shown on TV and online.