The world's population will reach seven billion on October 31 2011 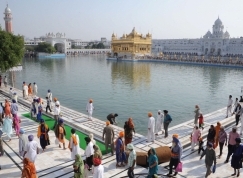 
The world's population will reach seven billion on October 31 2011, says the UN.

The world's population is set to reach seven billion, with the United Nations Population Fund predicting that the milestone will be hit on October 31, 2011.

India that is already the second most populous country, with 1.2 billion people, is expected to overtake China around 2030 when its population soars to an estimated 1.6 billion.