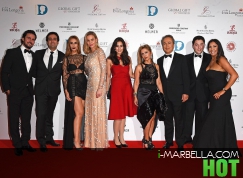 Proceeds from The VI Global Gift Gala London will go to support the Eva Longoria Foundation, The Diana Award, and The Global Gift Foundation.

The Global Gift Foundation held the sixth edition of the charity event on November 30 in London. The Four Seasons Hotel London at Park Lane hosted an evening in which one of the founders, María Bravo, had the support of actress Eva Longoria as honorary chair. The actress, is concentrated on her new television project, called Telenovela, however she remains committed to initiatives for the most in need as well as her unconditional support to the Global Gift Foundation causes. "Going back to London is very reassuring as we know that the people here have a strong social conscience and thrilled us to continue with our work".

The VI Global Gift Gala London was especially emotional for the thanks that Princes William and Harry gave to both the Global Gift and the Eva Longoria Foundations in the letter that the presenter Nick Ede read during the event and said the following: "My brother Harry and I want to thank with this letter the unconditional support for the Diana Award which is so important to us and our mother, but also our wish is to continue this relationship during 2016".

María Bravo and Prince William coincided last 21st September in one of the activities of the Diana Award for the 'Anti-Bullying' Project. In that event the Prince showed a deep interest for the activities and the worldwide social commitment of the Global Gift Foundation. "It is an honour to have the support of the British Royal Family. Your letter gives us more strenght to continue with the fight for the most in need", said María Bravo.

The London Gala aims to raise funds for various projects that improve the lives of families in need all over the world. On this occasion, the raised funds will be donated to charitable causes of three foundations: The Eva Longoria Foundation, The Diana Award, and The Global Gift Foundation.

The funds raised for The Eva Longoria Foundation will reinforce entrepreneurship programmes and micro loans for Latinas in the United States.

The Diana Award was established in memory of the Princess of Wales and pays tribute to her belief that "Young people have the power to improve the world". The Foundation has the support of her two sons which they honour their mother's legacy through a mission: to inspire and recognize the social actions of the youngest. The foundation that has celebrated its 16th anniversary fighting against bullying among others activities. "We express great gratitude for the support that The Global Gift Foundation has given us over the past two years and we are happy to continue our work with them. We are the legacy of Princess Diana and we feel that Global Gift is part of that legacy, with the same enthusiasm, the same values and the passion for this work".

Among the programs developed by the foundation, "The Diana Award" highlights 'Anti-Bullying' for the prevention of bullying suffered by some children. Over 15,000 ambassadors train young people through workshops and meetings in more than 3,000 schools in the UK.

Meanwhile, Maria announced that funds corresponding to The Global Gift Foundation will be used for its own project that they are working on: La Casa Global Gift in Marbella that is a multifunctional centre for children with special needs and their families, providing psychological help, medical treatment and therapy for children affected by rare diseases.