Spanish hopes for the Golden Globes 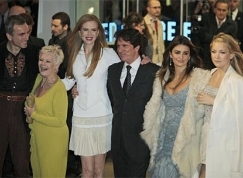 The rivals in the category for best supporting actress are Vera Farmiga and Anna Kendrick (both for "Up in the Air"), Mo'Nique (Precious), and Julianne Moore (A Single Man).

Pedro Almodóvar has been nominated for the fourth time for his film "Los Abrazos Rotos". In this category, the native of La Mancha is up against the Chilean film "La Nana", the French "Un Prophète" "Baarìa" from Italy and the German contender "Das Weisse Band".

Jeff Bridges (Crazy Heart), George Clooney (Up in the Air), Colin Firth (A Single Man), Morgan Freeman (Invictus) and Tobey Maguire (Brothers) were elected as candidates for Golden Globes in the category of Best Performance by an Actor in a Motion Picture.  Whilst Emily Blunt (The Young Victoria), Sandra Bullock (The Blind Side), Helen Mirren (The Last Station), Carey Mulligan (An Education) and Gabourey Sidibe (Precious) were chosen as candidates for the Best Performance by an Actress in a Motion Picture

As for the category of Best Director; James Cameron (Avatar), Quentin Tarantino (Inglourious basterds), Clint Eastwood (Invictus), Jason Reitman (Up in the Air) and Kathryn Bigelow (The Hurt Locker) were nominated.

Nominations for the Best Drama of the year include Avatar, Up in the air, Inglourious Basterds, The Hurt Locker and Precious.

A Spanish film opens the 71st Cannes Film Festival celebrated from May 8 to 19, 2018 Gallery