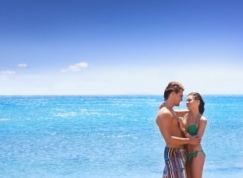 Thousands of tourists flock to the Spanish costas each year and, while they can rest-assured that temperatures will soar, they can no longer be guaranteed the laid-back beach lifestyle they long for.

Spain has finally followed suit and succumbed to strict EU regulations in an attempt to ban unacceptable behaviour and attract a higher calibre of tourist to its beaches. Banned beach activity now includes listening to music without headphones, barbecuing without the police’s authority and, notably, not being allowed to have sex on the beach.
Benidorm has perhaps taken the new regulations most seriously by introducing a 750 euro fine for anyone caught “in the act” on one of their many beaches. Amazingly, this penalty will also apply to anyone simply found walking or sitting on a Benidorm beach between the hours of midnight at 7am! Alicante is also paving the way with a new rule which enforces a 750 to 1500 euro fine to anyone on the beach spotted removing their swimming costume.
The controversial new laws have been met with anger by some Spanish communities who have contested the regulations by spraying graffiti which reads “Sex on the Beach” in English across buildings. Users of Spain’s many nudist beaches and colonies are also said to be outraged by the confining new rules.

Marbella, to be promoted as Madrid´s Beach (3)