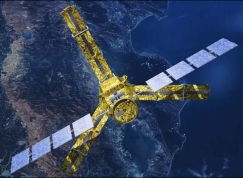 The satellite, sent into orbit from Plesetsk in northern Russia in the early hours of Monday, was something of a landmark for Spain

Spain has been increasing its contribution to the European Space Agency for a number of years now, and is currently the fifth largest member financially - behind Germany, France, Italy and the UK.

The programme cost of the Soil Moisture and Ocean Salinity (Smos) satellite is in the region of 315m euros. France, one of the great power-houses of European space, has put more than 100m euros into the mission, but Spain is also sitting in the front seat having contributed 70m euros.

Spanish engineers have spent something like 15 years developing the spacecraft's novel instrument - Miras.
Jorge Lomba from the Centre for the Development of Industrial Technology (CDTI) in Madrid, commented on just how important Smos was to his country:"We have launched national missions but for something which is a contribution to European programmes, this is by far the largest. Because this is quite complete in the sense that we have leadership in the instrument, industrial leadership in the scientific centres in Spain, and leadership in one of the two principal investigators in Jordi Font."

Jean-Jacques Dordain, the director-general of Esa, was very quick to praise Spain after Monday's successful launch.
"With Smos, Spanish industry has made a breakthrough from being an equipment supplier to a system provider with a very complex instrument."

Meteorologists, hydrologists and climatologists have high hopes for Smos and its Miras instrument. It should gather some remarkable new data on the wetness of soils and the saltiness of the oceans.