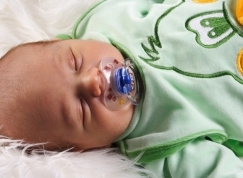 
A Chinese couple reportedly sold their six-day-old son to buy a mobile phone.

The unemployed couple were caught out after the tot was sold on twice. He was initially bought by a 43-year-old man for $368 who attempted to resell him for $1 ,470 after pretending to be his uncle.

The baby's 21-year-old father said: "I have no job and cannot support myself, let alone the baby." The 19-year-old mother said she would take the child back and raise him alone, but police claim she is unfit to look after the child. The tiny tot is currently in hospital.