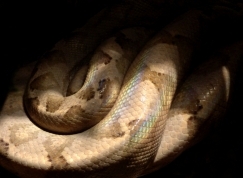 
A snake in Britain needed emergency surgery after choking on its own tail.

Pet Reggie - a 3ft (91 cm) long King snake - almost died when it took a chunk out of his own tail after mistaking it for another reptile.

In these situations, the animals are usually able to regurgitate food. However, Reggie's backward-facing teeth meant he started to choke and was rushed to Seers Croft Veterinary Centre in Faygate, West Sussex. There, reptiles expert Bob Reynolds managed to free the tail after dislocating the animal's jaw. He said: "Its teeth were acting like a ratchet."