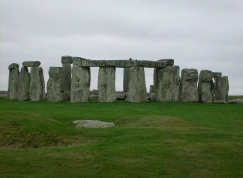 
Archaeologists have revealed that evidence of a second stone circle has been found near the site of Stonehenge in the United Kingdom. It is thought the smaller circle was built around the same time, making it 5,000 years old.

Only chips remain of the 27 stones that made up the site, which was built from spotted dolerite rocks thought to have originated in the Preseli Hills in Wales. From there they were dragged 200 miles to be built just one mile (two kilometres) from Stonehenge.

Because the rocks it is made from are known to appear blue, the site has been given the name Bluehenge. Although the stones are gone, the holes they left remain. Stonehenge was linked to the River Avon by a pathway, and Bluehenge lies at the end of this.

The BBC quotes researchers working on the site, which was excavated over the summer by Sheffield University, as calling the discovery "very important". A full report is expected in February 2010.