Santa gets a facelift for Christmas 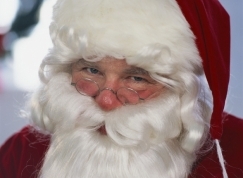 The 20-meter (66 feet) tall fiberglass Santa has been among the festive decorations in Auckland since 1960 but in recent years began to struggle with one of his eyes that was made to wink and a mechanical figure that moved in a welcoming gesture.

"There was a concern the guy did look a little creepy. It was the finger and the Sad Sack, winking, droopy eye," Heart of the City chief executive told local media.

The Santa, that stands on a street corner in the city center, has undergone extensive facial work over the past four months at a cost of over NZ$100,000. His face remains bandaged ahead of a public unveiling on Sunday but his mechanical figure has been replaced with a static digit.