The Festival Kuwait-Spain in Marbella in Pictures 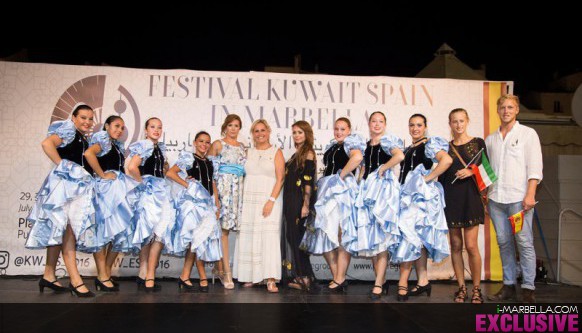 This totally free event was open to people of all religions and cultures, with the aim to fortify relations between Spain and Kuwait. Throughout the three days, the focus was to celebrate the relationship between the two countries. Moreover, the stalls on display allowed people to learn about the art, culture, and tourism that form the identity of both these nations.

With support from the Third Secretary, Head of the Kuwait Ambassador Office in Málaga, Mohammad Amér Al Hajeri, the CEO and organiser of the event, Abrar Faisal Al Masoud and as representatives from the Marbella Council, the Deputy Mayor and Tourism Councillor, Javier Porcuna, and the Head of Tourism, Miguel Luna the press release reported:

“This idea was born because of my love for this country, in particular Marbella, where I have many fond childhood memories that I will treasure for many years. I hope this event sheds some light on the relationship between Spain and Kuwait in relation to the economy, politics, culture, art and tourism amongst others. Therefore creating a way to extend links between both countries and that everyonen may have the chance to learn about the culture of Kuwait”, stated Al Masoud. Abrar was insistent on using this opportunity to thank the municipality and the embassy in their cooperation in inviting everyone to attend this cultural event. As a Future Group initiative, their director described this event as, “a gift we want to give to Spain y Kuwait”, to which she then added, “next year we hope to put on a bigger festival, only this time with all the countries from the Arabian Gulf”.

The Third Secretary, Head of the Kuwait Ambassador in Málaga Mohammad Amér Al Hajeri confirmed that, “The Kuwait embassy will strive to support tourism between the two countries by means of establishing a service aimed at satisfying the interests and desires of the Kuwait citizens in the Malaga province and the south of Spain.” He believes that, “Spain is considered as one of the most popular destinations for the people of Kuwait” because not only does the number of Kuwaiti visitors increase each year, but also from the high number of residential properties they have in Spain. Al Hajeri explained that this festival will be part of the framework of events organised by the Embassy to promote tourism activities. He wanted to emphasize that the institution “has concentrated to maximise” all efforts towards helping the activities achieve the greatest success.

With regard to the Deputy Mayor and Tourism Councillor, Javier Porcuna and the Head of Tourism, Miguel Luna, they both wanted to give their most sincere gratitude for this initiative that will reinforce the “long and close existing relationship between Marbella and Kuwait.” To host an event of this scale in the city is “a pleasure and an honour”, which the Head of Tourism and Marbella council have promised to invest all their efforts.

The festival started on Friday with a special guest appearance from the Vice Ambassador of the Kuwait Embassy, Mesheal Abdelmohsen Alsaed as well as the Mayor of Marbella, José Bernal. Over the course of the festival, there were flamenco and Kuwait danza performances, whose participation and collaboration “was gratuitous” and entertained the attendees. What is more, small vendors from both countries had different stands on display.

Last but not least, there were artisan crafts, typical Kuwaiti clothing, and food as well as traditional and cultural pieces of art. In addition, a similar Spanish area to the event that represented the solidarity between both nations.

As a sign of gratitude and recognition to Marbella Council, the Mayor, and the Ambassador, a small award was given for all the hard work over the course of the festival.

The Festival Kuwait-Spain in Marbella