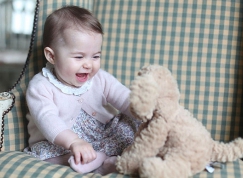 Official photographs of Princess Charlotte released last week feature her in a £21 dress made by a Spanish boutique. But the company will not be able to capitalise for one simple reason.

Dozens of designers have benefited from the Kate effect, the George effect and even the Charlotte effect as garments fly off their shelves after being worn by the Duchess of Cambridge or her children.

Fashion bloggers usually take a matter of minutes to identify each new outfit, resulting in rush of online orders. Not so, however, the dress worn by Princess Charlotte on front pages the world over this week, which left the experts stumped.

Now the mystery has been solved; the £21 floral frock she wore for the first official pictures since her christening was made by a tiny Spanish boutique brand called M&H. Its owner, however, has missed out on the usual cash bonanza because she has, alas, run out of the material she used.

Margarita Pato Cid has been inundated with requests to her website for copies of the dress after it was identified by Hello! magazine, but to her obvious frustration, she is out of stock and her supplier has stopped making the fabric.

"I only have 10 metres of that cloth left," she told the Telegraph. "I have had inquiries from as far afield as America, but the material will do for 22 dresses at most, and I can't get any more because the factory that makes it in Valencia has moved on to material for summer 2016 and next winter.

"We are completely overwhelmed by the demand and I don’t know how we are going to meet it."

Ms Pato Cid, 62, has five shops in Spain, including two in Madrid. Princess Charlotte’s dress is thought to have been bought in the Valladolid branch in the north of the country by Princess Charlotte's nanny Maria Borrallo, who is from nearby Palencia.

Ms Pato Cid said: "I am so excited. We are a small company, and I choose the material, design the clothes, I do everything. For me, seeing the princess wearing one of my dresses is like winning the lottery, a huge prize. I am so happy."