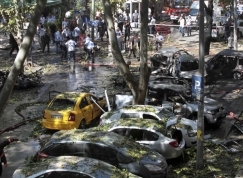 Burnt and damaged cars are seen at the site after a car bomb exploded in a busy street in the Turkish capital Ankara, Turkey, Tuesday, Sept. 20, 2011 Source: Scanpix


A powerful bomb attack in the Turkish capital Ankara has killed three people and injured at least 15 others.

Three people have been killed and at least 15 injured in a bomb attack in the centre of the Turkish capital Ankara. "Three citizens were killed and 15 were injured, five of whom are in critical condition," Interior Minister Idris Naim Sahin said.

Mr Sahin said "there is a high possibility that it was a terrorist attack". Deputy Prime Minister Bulent Arinc said that a bomb attack caused the explosion.

The blast occurred near the Cankaya district administration office and blew out the windows of shops and offices in the surrounding area. It also damaged cars and started a fire, which was later put out by firefighters at the scene. The offices are near downtown Kizilay square in Ankara, a city of 4m inhabitants and home to many government buildings, as well as military headquarters.

A bomb attack in Marrakesh