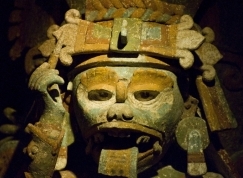 
Possible teenage suicide pacts and the potential for traumatizing fear in young children has prompted The National Aeronautics and Space Administration (NASA) to release a video and other information this past week discounting theories that the end of the Maya calendar on December 21st, signifies the end of the world as we know it.

On November 28th, NASA scientists took to the Internet to battle the rumors and calm the hype associated with the widespread misinterpretations of the Maya calendar which comes to an end on the winter solstice thus ending a calendar cycle called the 13th b'ak'tun. Many people around the world have come to see this date as a prophesy of the apocalypse, while others simply find it humorous, but NASA isn't laughing.

The event held on Google+ and throughout social media, with an invitation for Twitter followers to tweet any questions they may have to the #askNASA hashtag, was in response to emails and letters which have been pouring in to NASA from people dealing with severe anxiety related to end day fears, many of them from young people and some of them claiming to be suicidal.

"While this is a joke to some people and a mystery to others, there is a core of people who are truly concerned," said David Morrison, an astrobiologist at NASA Ames Research Center via a Google+ Hangout video chat.

The NASA website page and the video  put out by NASA, debunk nightmare scenarios ranging from planet Niburu getting too close to the Earth, solar storms, catastrophic tidal effects caused by planetary alignments, meteors, and a massive shifting of the Earth's magnetic poles, to name a few.

Despite the 52 million tourists expected to visit Mexico's Maya regions, and the doomsday television specials on various networks, NASA is adamant.

"The world will not end in 2012," the NASA website says. "Our planet has been getting along just fine for more than 4 billion years, and credible scientists worldwide know of no threat associated with 2012."

Mike 12-12-2012 12:05 What is predicted will happen, the galactic alignment is very real and result unknown, but its likely just to pass with nothing of relevance except for deep space gazers. Or as per the films maybe they are trying to calm everyone as what would be the result if 21st was confirmed as D-Day?
0