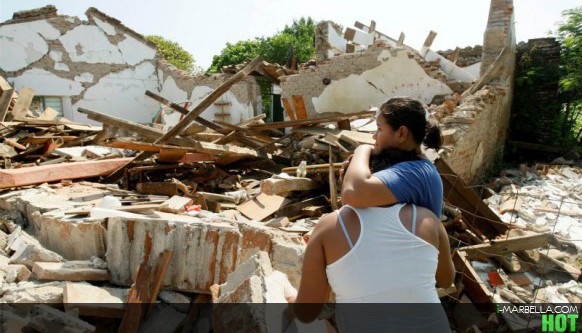 Women hug while next to a destroyed house in Union Hidalgo, Mexico. Source: STRINGER / Reuters


The death toll from the massive earthquake that struck Mexico Thursday has risen to at least 90, officials said as relief efforts continued.

The North American continent has been hit by many natural disasters, last week the Caribbean was "touched" by the hurricane Irma, and it's followed by Katia and Jose.

But if that wasn't enough, Mexico was struck by an earthquake. The 8.1 magnitude quake that struck off the coast of Chiapas was stronger than a devastating 1985 temblor that flattened swathes of Mexico City and killed thousands.

The death toll from the massive earthquake that struck Mexico Thursday has risen to at least 90, officials said as relief efforts continued.

At least 15 more people died in the neighboring state of Chiapas, according to local authorities, while another four deaths have also been confirmed in the state of Tabasco to the north.

Relief efforts in the south continued through Saturday, with many of the people worst affected still wary of returning indoors to weakened buildings, fearing they could be brought down by ongoing aftershocks.

Officials in Oaxaca and Chiapas states said thousands of houses and hundreds of schools had been damaged or destroyed. Hundreds of thousands of people were reported to be without water service.

Many people continued to sleep outside, fearful of more collapses, as strong aftershocks continued to rattle the town, including a magnitude 5.2 jolt early Sunday.

Local officials said they had counted nearly 800 aftershocks of all sizes since the big quake, and the U.S. Geological Survey counted nearly 60 with a magnitude of 4.5 or greater.