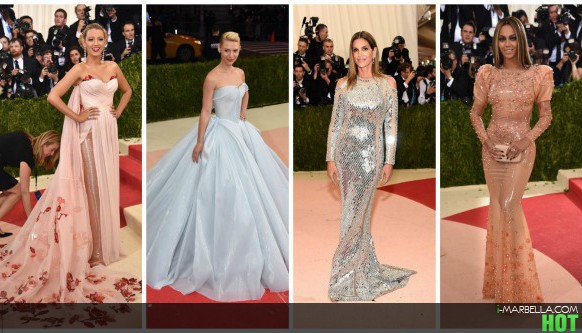 This year, the Costume Institute ball was centered around the idea of "Manus x Machina: Fashion in an Age of Technology," exploring the relationship between clothes created by hand (or "manus") versus the machine.

As expected with a technology-tied theme, metallic accents paired with sleek, slick-backed hairstyles featured prominently on the night.

Models Alessandra Ambrosio and Cindy Crawford, and the Kardashians' youngest Kylie Jenner were among those who opted for sterling-hued looks.

Singer Rita Ora donned a metallic grey, feathered Hunger Games-like get up while actress Kate Hudson's white dress was more of a sculptural and deconstructed take.

'Homeland' star Claire Danes was glowing, quite literally, with a dress that could light up designed for her by Zac Posen.

Even the famously stern 'Vogue' editor-in-chief Anna Wintour took on a futuristic vibe.
The exhibition itself charts the evolution of fashion from the invention of the sewing machine to the onset of mass production that's enabled fast fashion juggernauts like Zara and H&M to thrive.

In fact, H&M outfits made it onto the night's red carpet via actresses Hailee Steinfeld and Amber Valletta.

Hallowed haute couture -- painstakingly crafted by teams of artisans -- is pitted against the "gotta-have-it" now mentality of ready-to-wear and the high street.

Although the company's most fashion-oriented venture -- Apple Watch, along with other wearables like Google Glass have failed to impress so far -- it was the high profile departure two years ago of Angela Ahrendts, who ditched her role as CEO at historic British fashion house Burberry for Apple that alerted the world to the increasing collaboration between the two arenas.

Driven by the advent of 3D printing, computer modeling and laser cutting techniques, fashion and technology are moving closer than ever.

Met Museum Costume Institute curator Andrew Bolton said the exhibition will hopefully "debunk some of the mythologies of the handmade and machine."

"Traditionally the handmade has been seen as being about luxury, about superiority and it's also been seen as something that's elitist," Bolton explained. "Whereas the machine has been about progress and the future. On the other side, it's been about mediocrity and dehumanization."

"I'm finding those values don't really hold up," Bolton continued. "Sometimes a garment that's been machine-made actually has more hours spent on it, is more luxurious than doing it by hand."