Message in a Bottle! 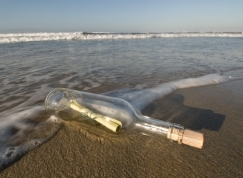 The bottle finally washed ashore on the Costa del Sol


The bottle travelled more than 4,500 miles

Lee Ann O'Rourke and her family were surprised when they got to know that the message in a bottle they threw into the Gulf of Mexico during a Carnival cruise over two years ago actually made a trip across the Atlantic.

And now they are reliving the memories, thanks to a couple who found the message while walking along the beach in Costa del Sol, a week ago.


"Isn't that amazing. We never expected to hear from anyone and when we did, at first I didn't believe them... but they emailed a photo of the message," abcactionnews.com quoted O'Rourke as saying.

The couple who found the note identified themselves as Tye and Vickie, and emailed to Leanne, saying: "We joke about finding messages in bottles on the beach all the time and now we found one."

The bottle travelled more than 4,500 miles out of the Gulf of Mexico, across the Atlantic Ocean, through the Strait of Gibraltar, into the Mediterranean Sea before washing ashore in Costa del Sol.