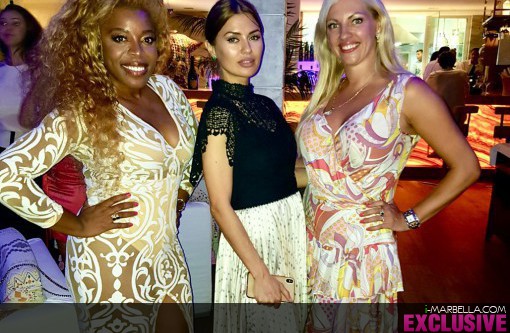 
Once again Starview Magazine showed off with its Night of the Stars Gala and the Top Awards 2019, which this August 4th took place in one of the best category venues in Spain, Besaya Beach Marbella.

During the evening, attendees such as Victoria Bonya, Isabel Pérez Dobarro, and Gines Serran gathered to receive tributes and enjoy the best entertainment in this annual gala of awards organized by Jaime Acevedo (Starview Magazine) with the support of Natasha Romanov.

Some prizewinners not only received their homage but were part of the experience of the event, as was the case of Gines Serran, who in addition to giving his painting "heart" for the photocall provided a statue to reward Victoria in his tribute.

In addition, as part of the entertainment of the night were the champions of dance José Aranda and María Vela, Lorena Morlote, Javier Barrio with his incredible collection of Haute Couture, Alena Kupchynskaya Po Allen who coordinated his parade, and Yanela Brooks, who also took the surprise prize in this gala in which even Annika Urm from i-Marbella with her fiance Veiko Huuse were present.

Since 2014, and under the direction of Jaime Acevedo, Starview Magazine has functioned as a bilingual magazine, which is initially aimed at the Chinese public, but is currently disseminated around the most important points in Spain, disseminating and informing about current affairs, events and lifestyle with focus and special affection towards the city of Marbella.

Besaya Beach is located on the promenade of Marbella, near Puerto Banus and a few meters from the beach. At your table, you will find our interpretation of Mediterranean kitchen with a "nouvelle cuisine" approach.

You can book a place in the party using the contact form below.