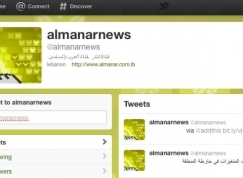 
Jerusalem (CNN) -- Is Twitter aiding and abetting terrorism? The director of an Israeli legal outfit says yes, and is threatening to sue the micro-blogging site if it doesn't change its policies.

Nitsana Darshan-Leitner, director of the Shurat HaDin Israel Law Center, sent a letter to Twitter on Thursday asserting that the company is violating U.S. law by allowing groups such as Hezbollah and al Qaeda affiliate al-Shabaab to use its popular online network.

"It has come to our attention that Twitter Inc. provides social media and associated services to such foreign terrorist organizations," Darshan-Leitner wrote. "Please be advised that (doing so) is illegal and will expose Twitter Inc. and its officers to both criminal prosecution and civil liability to American citizens and others victimized" by Hezbollah, al-Shabaab and other foreign terrorist entities. Twitter declined to comment when contacted by CNN.

In her letter, Darshan-Leitner noted that Hezbollah and al-Shabaab are officially designated as terrorist organizations under U.S. law. She also cited a 2010 Supreme Court case -- Holder v. Humanitarian Law Project -- which upheld a key provision of the Patriot Act prohibiting material support to groups designated as terrorist outfits. "Your provision of social media and associated services to Hezbollah and other foreign terrorist organizations would constitute the type of seemingly innocuous material support that would render your company and you personally criminally and civilly liable," she told Twitter CEO Richard Costolo.

Darshan-Leitner says she realizes there will be stiff opposition to a potential lawsuit from free speech advocates, but told CNN she nevertheless hopes Twitter will change its policies. "Once you bring it to their attention, they cannot say that they don't know," she said.

Aden Fine, an attorney with the American Civil Liberties Union, told CNN that the Supreme Court "has not directly addressed the issue of whether any speech allegedly supportive of a designated terrorist organization is unlawful." But "the government can't force private companies to censor lawful speech just because the government doesn't like the speech or the people making the speech," he said.

Fine noted that since the Internet depends on private companies such as Twitter to function, any clampdown or adverse ruling could be used to restrict everyone's online communications. Social networks Twitter, Facebook, and YouTube have been lauded for the role they played in the Arab Spring, a series of anti-regime protests that erupted across the Middle East starting in late 2010. The online networks and instant messaging services were used extensively to spread the word about demonstrations, especially in the case of the Egyptian uprising that toppled longtime strongman President Hosni Mubarak.

A number of governments, however, have started arguing for stricter controls. Authorities in the United Kingdom say rioters used social the networks to coordinate mass civil disobedience earlier this year in London. State prosecutors in Mexico have accused two people of terrorism and sabotage by claiming that their Twitter posts helped spread false rumors about a school attack, leading to real-life violence on the streets of Veracruz.

The Shurat HaDin Israel Law Center describes itself as a civil rights organization dedicated to "combating the terrorist organizations and the regimes that support them through lawsuits litigated in courtrooms around the world." It supported a similar campaign earlier this year directed at social media giant Facebook. Among other things, the center succeeded in getting Facebook to pull down a page created by Palestinian activists calling for a "Third Intifada" against Israel.