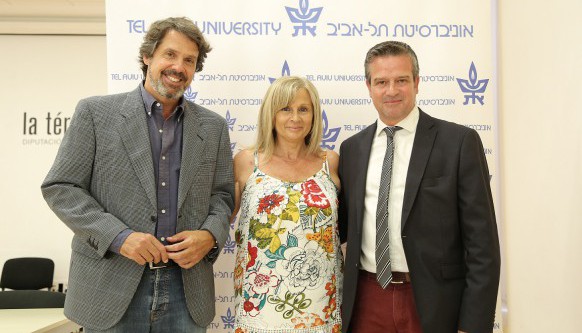 
Patricia Nahmad, co-president of the Association of Friends of Tel Aviv University in Spain and Teodoro León Gross, a renowned writer and columnist, presented the series in Marbella with the support of Víctor González, Minister of Culture for the Council of Málaga.

The program, led by nationally and internationally renowned intellectuals, starts off in Marbella this Thursday 29th June with a lecture on  ́National Populism and the Press ́ at 20:30, R.S.V.P. secreteriatauspain@gmail.com, free entry, space limited. Distinguished speakers include Arcadi Espada and the previously mentioned Teodoro León Gross. They will follow with  ́The Role of Intercultural Communication in International Diplomacy on the 14th of September in Madrid with Professor Yoav Tenembaun, a highly respected member of the Diplomacy Program run by Tel Aviv University, leading the lecture. The meeting will be attended by two ex-ministers of Foreign Affairs, explained the co-president of the Association of Friends of Tel Aviv University in Spain, Patricia Nahmad, ́ ́in order to verify the theory and the practise of diplomacy ́ ́ she explained.

Victor González, Minister of Culture, emphasised the importance of these types of initiatives in revitalising one ́s cultural experiences and  ́ ́see what is happening in 21st century Spain ́ ́. González emphasised the similarities between the work of la Térmica, ́ ́a meeting point for a variety people of different cultures and religions, and the Association of Friends of Tel Aviv University in Spain that hopes that ties between the Israeli University and Spanish institutions  ́ ́will continue to strengthen ́ ́.

At the same time, Nahmad emphasised the quality of the speakers attending each of the conferences all of whom have fantastic professional careers and are renowned in their respective fields, both journalism and political analysis, diplomacy and international relations.

Teodoro León Gross, a speaker in the first part of the series, ́National Populism and the Press ́, offered some inspirational words on the topics to be discussed this Thursday 29th June: ́ ́National Populism is the most important topic in the world and in the politics of the European Union ́ ́, he stated. Gross advised about the dangers that exist in the European Union at present, and emphasised the importance of the role of the press in broadcasting these populist ideas that ́ ́have surged in response to the collapse to the state of well-being".

León Gross will share reflections on the unfaltering relation between nationalism and populism alongside journalist and writer Arcadi Espada.

The main objective of the Association of Friends of the University of Tel Aviv in Spain with its headquarters in Marbella is to strengthen the ties between the University of Tel Aviv, one of the most prestigious universities in the world and the most important in Israel, and Spain, extending its doctrine to other universities, institutions, and on a national scal in general by organising different activities and participating in cultural events with scientific, artistic, and innovative backgrounds.

A prior accreditation is required by writing to this email, providing the following information:

Conference "Educate your mind" in Fuengirola